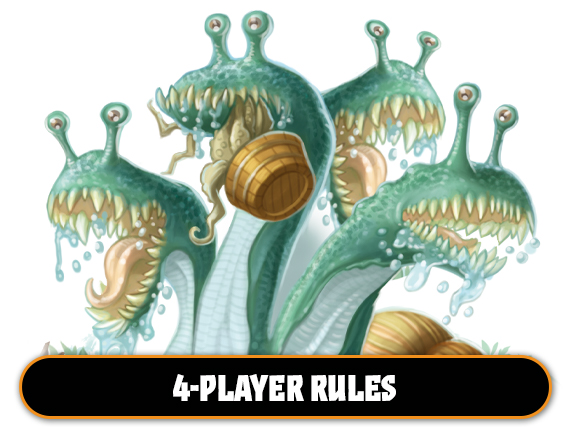 Disclaimer: These rules are still in an experimental mode.

Divide the 4 players into 2 teams of 2. Each player should sit across from the teammate so that an enemy is sitting to their left and to their right.

Each team starts with 3 life points that are shared between the two teammates.

Each player starts with

*also works with 1 Mindbug per player if you only have one Base Set available. But we recommend to play with 2 Mindbugs per player. If you own two copies of the game, you should shuffle both
decks together.

The goal of the game is to reduce your opponent to zero life points.

As in the 1v1 game, each turn consists of a player either taking a play or an attack action. Play passes clockwise around the table. The actions work just like in the 1v1 game with the following differences.

Play: When taking a play action, all the other players (including your teammate) will have the choice of spending a Mindbug to take control of your creature. First, the person to your left gets the possibility of doing this. If they pass, the person across from you (your teammate) gets that possibility. If they also pass, the person to your right gets that possibility. If any of them took control of it, you take another turn. Otherwise, you place the card into your own play area and your turn ends.

Attack: When you attack, first the player to your left gets the choice of blocking the attack. If they pass, the person to your right gets the choice. If they also pass, your attack goes through and your opponents lose one life from their collective life total. If this reduces their life total to zero, your team has won the game.

Allied creatures refer to the creatures in your play area but not those in your teammate’s play area.

Enemy creature is any creature controlled by one of your two opponents.

When a card refers to ‘The opponent’ there are two cases.

For Play, Attack and defeated effects, it means that when the effect is activated, you pick one of your two opponents.

Example: Tusked Extorter has the effect, ‘Attack: The opponent discards a card’. So every time you attack with it, you pick one opponent who has to discard a card.

For continuous effects, both of your opponents are affected.

Example: Elephantopus has the effect ‘The opponent cannot block with creatures with power 4 or less’. This affects both opponents.

Lone Yeti: This has +5 power and frenzy even if your teammate has creatures in play as long as it is your only creature.

Kangasaurus Rex: This defeats all such creatures from both opponents.

Snail Hydra: When the effect is activated, you pick an opponent to compare creatures with. If you have fewer creatures than that opponent, you get to defeat any creature in play (could be from the other opponent for example).

Brain Fly/Harpy Mother: You may use this to take control of your teammate’s creature

Page load link
You hear a strange voice in your head...

Subscribe to my orders to receive exclusive card spoilers for my new expansions.

You hear a strange voice in your head...

Subscribe to my orders to receive exclusive card spoilers and latest infos
on the Kickstarter launch.

You hear a strange voice in your head...

Subscribe to my orders to get notified once Mindbug is available for Pre-Orders.